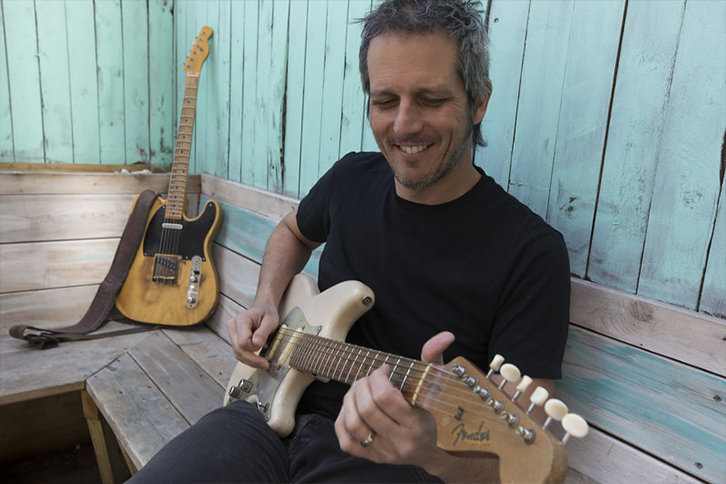 With eleven albums of original material and guest appearances on dozens of recordings — from the Bammie-winner’s contribution on Cake’s million-selling Prolonging the Magic to doing lead guitar duties with The Little Willies, his band with Norah Jones – Jim Campilongo has played with scores of performers. He has earned two Gold records, and has written music for national ads for National Grid, Volkswagen, SBC, Michelin and Jack Daniel’s

Additionally, Campilongo is a published guitar teacher and contributing editor for Guitar Player Magazine. Campilongo’s TrueFire instructional video “Sonic Tele” continues to be a best seller along with his popular, homespun “Lessons By Mail”, offered on his website. Campilongo’s virtuosity and originality has inspired a generation of guitar players. His songwriting uses a palette of the best in Blues, Country, Jazz and Rock with a sensitivity and wit that earned him a broad fan base.

In 2013, Fender Guitars bestowed him the honor of the Campilongo Signature Telecaster, a high quality instrument made by Fender’s elite Custom Shop. The Jim Campilongo Electric Trio have performed every Monday at NYC’s Rockwood Music Hall, which Time Out New York recommended as “one of the city’s strongest”, touting “Monday night means Jim Campilongo.”

Brooklyn-based guitarist and producer Luca Benedetti has been performing in a wide variety of Roots, Jazz, Country, and Americana-inspired projects since moving to New York in 1996. His most recent collaborations include performances, production and recordings with Hermine Deurloo & Steve Gadd, Jim Campilongo and a variety of other artists.

McDonald’s, Subway, Rolex, Arby’s, The Cotton Industry, Axe, AT&T and many more, have featured Benedetti’s session work on their advertisements. He also scored the music for The Cuban Cowboys inspired soundtrack for KPI TV’s “Lucha Libre: Life Behind The Mask.” An active music instructor, he has taught privately as well as at The City College of New York, The Long Island Conservatory & Larchmont Music Academy.