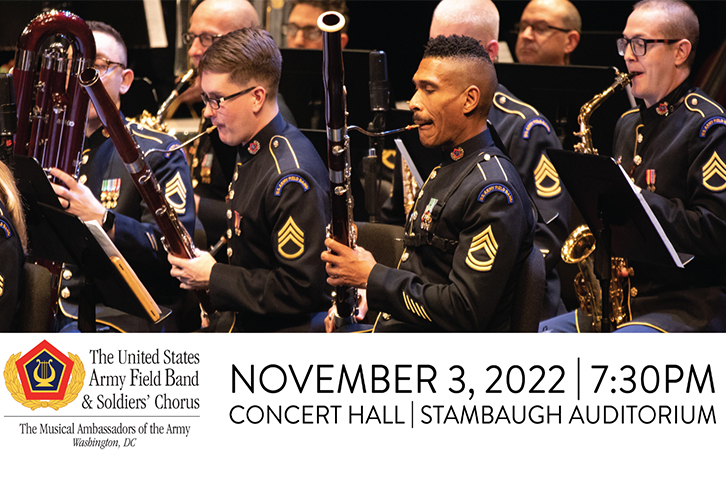 On Thursday, November 3 at 7:30pm, The U.S. Army Field Band Concert Band & Soldiers’ Chorus from Washington, D.C. will take the Concert Hall stage at Stambaugh Auditorium. The Concert Band & Soldiers’ Chorus presents “Heroes,” a celebration of people who have gone above and beyond for their communities. The event is free and open to the public. There will be a limit to four tickets per order.

The concert will present a musical journey through stories of strength, determination, and courage shared through the generations of those that answered our nation’s call. The U.S. Army Field Band & Soldiers’ Chorus has been thrilling audiences of all ages for more than six decades. As the premier touring musical representative for the United States Army, this internationally-acclaimed organization travels thousands of miles each year presenting a variety of music to enthusiastic audiences throughout the nation and abroad. Through these concerts, the Field Band fosters the support of the American people for members of the armed forces and supports diplomatic efforts around the world.

The Concert Band is the oldest and largest of the Field Band’s four performing components. This elite 65-member instrumental ensemble, founded in 1946, has performed in all 50 states and 25 foreign countries for audiences totaling more than 100 million. Tours have taken the band throughout the United States, Canada, Mexico, South America, Europe, the Far East, and India. Since its formation in March 1946, the Field Band has appeared in all fifty states and in more than thirty countries on four continents. Tours include formal public concerts, school assemblies, educational outreach programs, festivals, and radio and television appearances.

Tickets are available now. Tickets will be available Monday through Friday, 10:00am-5:00pm by calling 330-259-9651 or in person at the DeYor Performing Arts Center Box Office. Tickets are also available 24 hours a day online at stambaughauditorium.com.