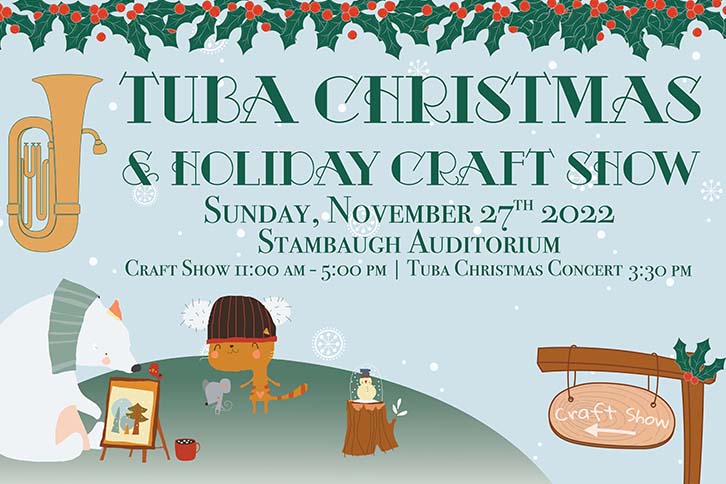 Stambaugh Auditorium’s Holiday Craft Show will return as part of the 49th annual Tuba Christmas Concert on Sunday, November 27, 2022. In its sixth year at Stambaugh Auditorium, the 3:30pm concert features local tuba players joining together to perform a variety of Christmas classics. The Craft Show will feature local artisans and crafters before and after the concert in the Jeanne D. Tyler Grand Ballroom. There will also be the opportunity to purchase Tuba Christmas merchandise, concessions will be available as well as a special appearance by Santa. A goodwill offering is encouraged and will be accepted at the door to help offset the expenses of the event.
The concert will also be live streamed on Stambaugh Auditorium’s Digital Concert Hall app and at stambaughauditorium.com.
Tuba Christmas is a celebration of the holidays for which tuba players come together to perform a variety of Christmas classics. The various sizes and sounds of the instrument along with the spirit of the musicians make this event extraordinary.
In the past, the event has garnered participation from nearly 100 tuba players. The idea for Tuba Christmas was conceived in 1974 by Harvey Phillips as a tribute to his teacher and mentor, William J. Bell, born on Christmas Day, 1902. The first Tuba Christmas was conducted by Paul Lavalle in New York City’s Rockefeller Plaza Ice Rink on Sunday, December 22, 1974.
For more information, visit the Stambaugh Auditorium website.