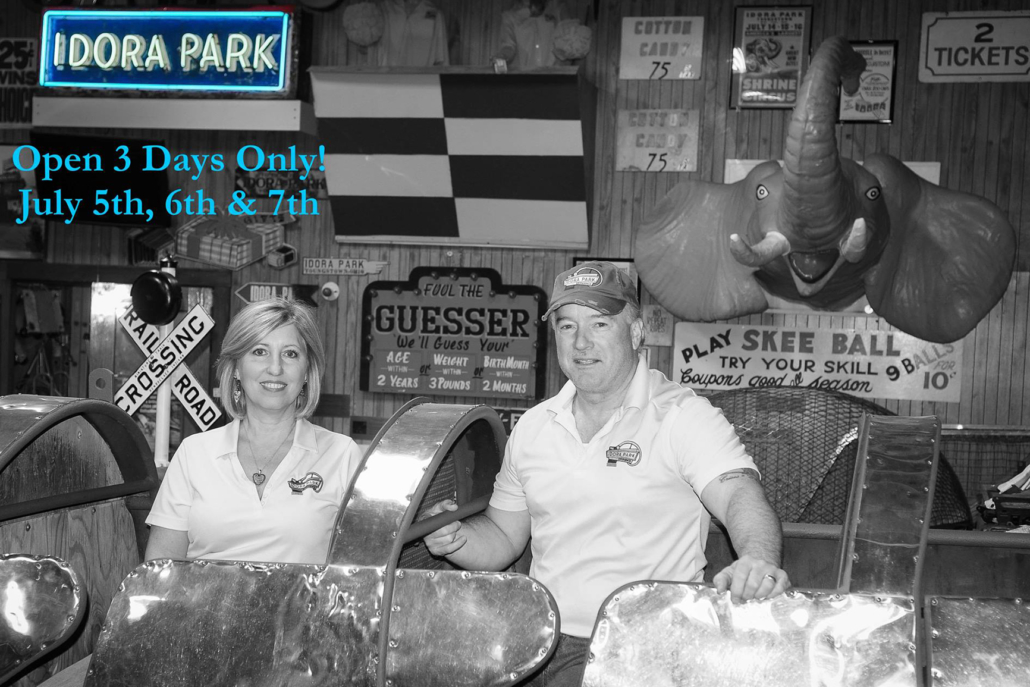 The Idora Park Experience is a private museum dedicated to everything Idora Park. Their mission is to find, rescue, restore and share Idora Park artifacts and to keep alive the memories of Youngstown Ohio’s Idora Park amusement park which existed from 1899-1984.

THE STORY OF THE IDORA PARK EXPERIENCE:

For more than 25 years Jim & Toni Amey have been scouring the USA to gather Idora Park artifacts, large and small. They have amassed what is believed to be the most extensive collection of Idora Park items in existence. The collection includes: The complete Kiddietrain; Wildcat and Jack Rabbit coaster cars; Turtles from the Turtle ride; A Silver Rocket Ship; A chariot from the Kooky Castle; A Rapids/Lost River Boat; Original Signage; and numerous other artifacts from rides, concessions and park memorabilia.

They have had an amazing journey with both hilarious and heartbreaking moments and have funded this adventure 100% with their own personal funds. Locating Idora Park artifacts and returning them to the Youngstown area has become a quest to reclaim an important part of our history.

In 2013 Jim & Toni retired to Canfield Ohio. They built a 4,400 square foot building next to their residence to house the artifacts and set about figuring out how to share the collection with others.

In March 2014, Canfield Township approved the Amey’s request to open The Idora Park Experience, but limited the openings to no more than three per year.

The Idora Park Experience held its grand opening on April 26 & 27, 2014 — April 26 being the 30th anniversary of the 1984 fire that signaled the end for Idora Park. The Amey’s have opened the museum four additional times since and have welcomed more than 7000 visitors to the museum.

The Amey’s mission of finding, rescuing, restoring and sharing Idora Park artifacts is ongoing. It has in fact, become a quest. They still follow every clue and scour the earth to gather what they can. Jim spends countless hours repairing and restoring artifacts and improving displays. If you haven’t seen the Idora Park Experience, you should. If you visited during one of the previous openings, much has changed and some artifacts have been added so you’ll want to see what is new.

Most of the items at The Idora Park Experience are true Idora Park artifacts. Because, like Idora Park, many of the original artifacts have been destroyed or lost forever, the Ameys have included in the collection some Idora Park “identical” or Idora Park “like” artifacts that help to bring the spirit of Idora Park back to life.

The prints you see on the items available for sale in The Idora Park Experience store are unique and from ORIGINAL Idora Park advertising campaign paintings which are estimated to be from 1923. The paintings were part of the campaign promoting the new Idora Park swimming pool, which opened in 1924. These paintings were lost for 84 years before Jim found them hiding in California.

Whether you have great memories of Idora Park, or have someone you know telling you how great Idora Park was, you won’t want to miss seeing this exhibit. Visitors to the museum have ranged in age from young children to adults in their 90s. The children are in awe that Youngstown once had such an amazing amusement park right in town. The adults have shared stories of their days at Idora. The stories are accompanied by smiles, laughter and tears, as they relive the past at Idora Park. Visit The Idora Park Experience and you’ll know the feeling too.

The best way to get up to the minute news, and to share in the Amey’s fun adventures searching for, finding, recovering and restoring Idora Park artifacts, is to follow them on Facebook: https://www.facebook.com/TheIdoraParkExperience.