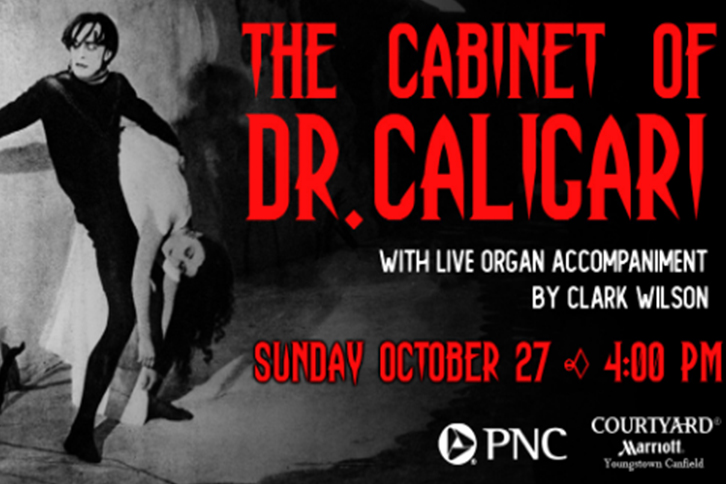 Stambaugh Auditorium will present silent horror film, The Cabinet of Dr. Caligari, with live organ accompaniment by organist Clark Wilson. The film is free to the public but tickets are required.

The film features the story of a carnival in a small town in Northern Germany where the highlight attraction is the peculiar Dr. Caligari and the even stranger, Cesare. Cesare, a somnambulist, has prophetic abilities when put into a trance by Caligari. Two friends, Francis and Alan, encounter the pair at the carnival. Though urged not to, Alan boldly asks, “When will I die?” The reply is chilling: “At first dawn!” At dawn, Alan is dead. Suspicions arise; is Cesare guilty? Or is something or someone else responsible?

Organist Clark Wilson began his scoring career in 1980 and has successfully toured North America with hundreds of film presentations at schools, universities, performing arts centers, theatres, film festivals and conventions. His work has led to performances for UCLA and the Academy of Motion Picture Arts and Sciences. He is the organist of choice for many of the American Theatre Organ Society’s international convention silent film presentations. In addition, he has led courses in theatre organ styling and silent film accompaniment at the Indiana University School of Music. He developed curriculum and has been appointed to the organ faculty at the University of Oklahoma’s Organ Department, where he teaches applied theatre organ lessons, silent film scoring and the history of the American theatre organ. Since 1992 Clark has served as Resident Organist and organ conservator at the famed Ohio Theatre in Columbus, Ohio.

For tickets, call 330-259-0555, or visit the Florence and Ward Beecher Box Office at Stambaugh Auditorium in person. The box office is open Monday through Friday, 9:00am-6:00pm and online at stambaughauditorium.com.