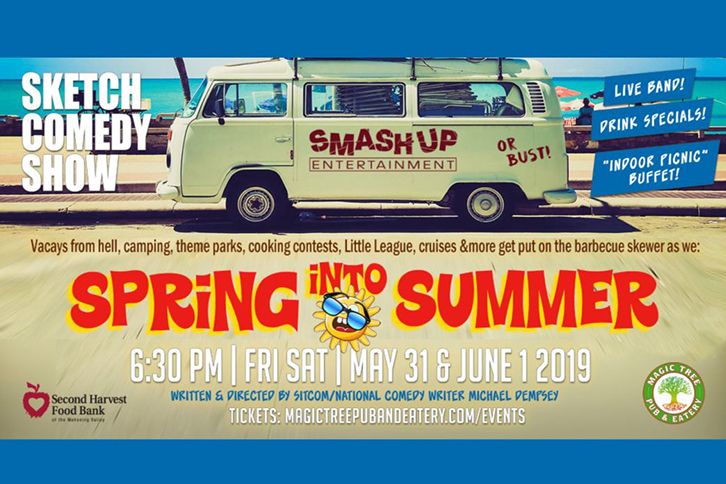 “What’s a sketch comedy cabaret? The show is a combination of ‘Saturday Night Live’-style sketch comedy, scenes and songs and showtunes,” said writer/director Michael Dempsey. “We put seasonal topics like camping, cooking contests, little league, cruises and vacation disasters on the barbecue skewer.” Dempsey added that the $35 entry price includes not only the show, but a buffet and live band. “Gourmet pretzels with dipping sauces, indoor picnic buffet and mini dessert bar: if you did a show and dinner of this quality independently, you’d pay a lot more. We also have group discounts and drink specials. So it’s a good value.”

Terry Shears, a local acting favorite and cast member, said “I might be dubious about sketch comedy if Michael wasn’t writing it. But this material is of the highest professional caliber. It’s just hilarious. The audiences have an absolutely blast.”

Dempsey, a respected local director and playwright, wrote for network television sitcoms and his plays have been produced in New York, Los Angeles, and regionally. He founded SmashUp Entertainment in 2018 to provide “something different” for local audiences. “Our stuff is pretty off-the-rails and wacky,” he said. “The three previous ventures with Magic Tree were extremely well-received. One person told me they laughed so hard they thought they were going to throw up,” he added, laughing. “A good problem to have.”

Dempsey warns that there are no walk-up sales due to the dinner element, and seating is very limited. “It’s two nights only, with a room capacity of 75,” he said. “It will sell out.” He also cautioned that show is rated “R” for language and content.

Reservations can be made by going to https://magictreepubandeatery.com/events or on the Facebook event page at www.facebook.com/events/428785957883575/ . You can also contact Dempsey at [email protected]