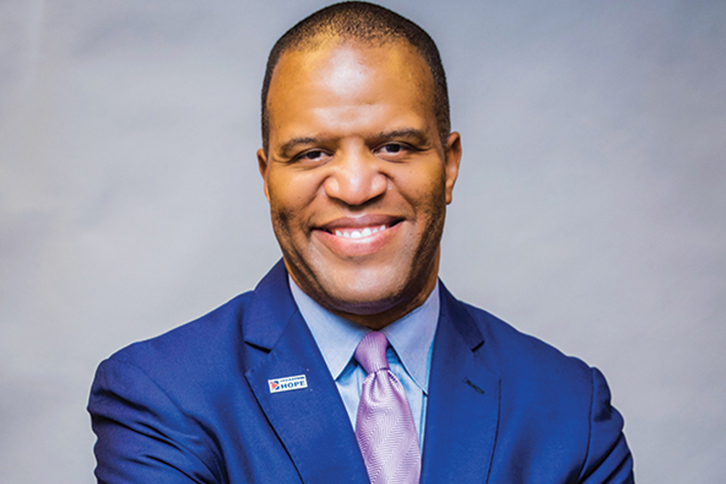 John Hope Bryant is often referred to as the Conscience of Capitalism. Most recently he was named one of Atlanta Business Chronicle’s “Most Influential Atlantans”, one of Georgia Trend Magazine’s “Notable Georgians” and one of LinkedIn’s “Top Voices”. Bryant was also recognized as one of the “Most Admired CEOs” in 2018, American Banker magazine 2016 “Innovator of the Year”, INC.’s “The World’s 10 Top CEOs” (honorable mention), and one of Time magazine’s “50 Leaders for the Future” in 1994.

Bryant is the Founder, Chairman, and CEO of Operation HOPE, Inc. the largest non-profit, best-in-class provider of financial literacy, and economic empowerment services in the United States. He is also the Chairman and CEO of Bryant Group Ventures and Founder and Principal of The Promise Homes Company, which is the largest minority-controlled owner of single-family rental homes in the United States. Both have experienced explosive growth under Bryant’s leadership. Five former US presidents have recognized his work, and he has served as an advisor to three sitting US presidents from both political parties. In 2016, Bryant became the only private American citizen to inspire the renaming of a building on the White House campus, when the US Treasury Annex Building was renamed the Freedman’s Bank Building.

Tickets to the lecture are free and available on a first-come, first-served basis with a limit of four per person. Tickets will be available beginning August 29, 2022 on the Stambaugh Auditorium website. For more information, visit the YSU Lecture Series website.