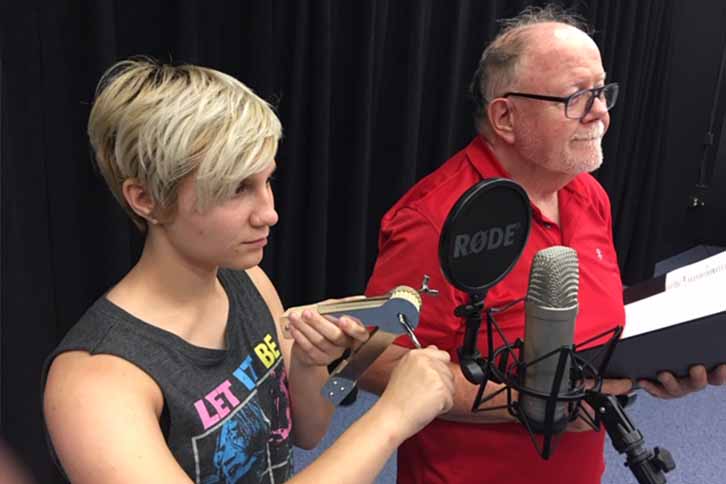 A Halloween themed show, “Haunted Youngstown-Ghastly Ghost Stories,” directed by YSU alumnus and adjunct faculty member Randall Brammer, is the theme of the next performance by the Good Humor Radio Hour on Tuesday, October 29 and Wednesday, October 30, at 6:30pm at the Butler Institute of American Art. The events are free, but tickets must be secured in advance by calling the University Theatre Box Office at 330-941-3105.

Based in the Department of Communication at Youngstown State University, the project draws widely on talent from the Youngstown-Warren region and YSU students, comprising actors, Foley artists, sound engineers and musicians. The Good Humor Radio Hour features live actors on old-time radio microphones including live sound effects and music as a selection of dramatic tales for the ear are presented. Audio Drama is performance of dramatic stories for a live audience by means of electronically processed sound alone. It usually involves voices, music, and sound effects, plus technical support and operation. During the 1930s and 1940s, American radio networks perfected the radio drama through a variety of half-hour productions such as Inner Sanctum, Fibber McGee and Molly, The Shadow, and The Lone Ranger.

The shows featured in this production are:

Ghost Hunt
Mrs. Thorpe is trying to flip a house she owns who no one wants to buy. As a marketing ploy, Realtor Mrs. MacDonald enlists Radio DJ Smiley Smith, and Parapsychologist Dr. Reed, to spend the night in the house to see if it really is haunted and broadcast their experience for the listeners. The results are terrifying when Mrs. Thorpe and Mrs. MacDonald come back the next morning to check on the men and see things have gone terribly wrong.

The Ghost Who Came To Dinner
Simona Templar has been invited to a dinner party at a house on the outskirts of Youngstown, and has hired Louie to drive her out there. They become detective partners, of sorts, when they end up stumbling upon a murder in the very spooky looking house. The question is, was the murderer a human or a ghost?

The Dark
A doctor and paramedic are called to a house to help someone who has been hurt in some way. It is seemingly another routine night at work until they reach the very unsuspecting house. However, once they get inside, they discover horrors no one could have never imagined. The question is, will they be able to get out alive?

Halloween Sound Story
The sound effects crew and orchestra will take the audience on an auditory ride through one of the haunted houses. The audience will hear various sound effects from the array of characters and creatures that inhabit the house.

Limited free parking is available at the Butler Institute of American Art or in the M30 Wick Avenue parking deck for a nominal fee. More information is available by calling the Office of Community Engagement and Events at 330-941-2307.