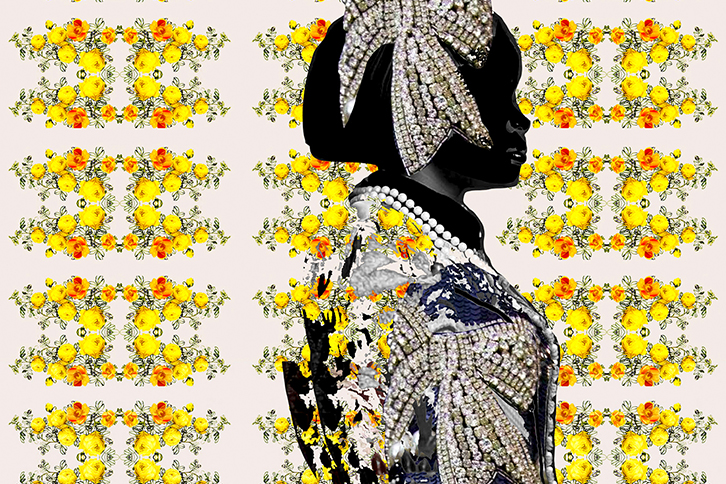 The work of five diverse artists will open the fall exhibition schedule at the McDonough Museum of Art on Tuesday, September 6 through Saturday, October 29. An opening reception will take place on Friday, September 9 from 5:00-7:00pm at the museum.

The exhibitions and reception are free and open to the public. The McDonough Museum is open Tuesday through Saturday, 11:00am–4:00pm.

Alisa Henriquez, Gavin Benjamin, Eva Kwong, Scott Goss and the late Kirk Mangus are the featured artists whose work will be installed in the McDonough galleries.

Alisa Henriquez combines digital images drawn from popular media culture, art history, and autobiographical sources with a host of materials including paint, resin, glitter, and synthetic hair and fur. Recurring motifs such as heavily mascaraed eyes, glossed lips, hair, and images of the body tap on encoded meanings and myths, conjuring ideas of female fertility, sexuality, and desire, albeit through an often media biased lens. Born in Kingston, Jamaica, Henriquez received a BFA from Rhode Island School of Design and an MFA from Indiana University, Bloomington. Her work is represented by David Klein Gallery in Detroit and has been exhibited at many venues, nationally and internationally. Henriquez is a Professor of Studio Art at Michigan State University.

The artist will give a talk on Thursday, September 8 at 5:10pm in the McDonough lecture hall.

The current work of Eva Kwong features hand-built and 3D printed forms in clay and PLA. Her work-study job at the Nature Lab at RISD immersed her studies in the diversity and similarity of forms from nature. Her lifelong interest in the intersection of the art and science of the natural world provides the conceptual framework and visual vocabulary for her compelling, colorful organic forms in sculpture, installations and vessels. She was born in Hong Kong and moved to New York as a teenager. She received her BFA from the Rhode Island School of Design and her MFA from Tyler School of Art. Kwong has presented her work in lectures, workshops and exhibitions throughout the US and in China, Korea, Japan, Australia, Italy and Finland.

Kwong will give a talk on Wednesday, September 28 at 5:10pm in the McDonough lecture hall.

Kwong is also providing watercolor paintings by her late husband, Kirk Mangus (1952–2013). Mangus was an internationally renowned ceramic artist and sculptor. He received his BFA from Rhode Island School of Design and his MFA from Washington State University. His murals, works in clay, on paper, in wood, and other media pull from a rich and diverse set of influences: ancient Greco-Roman art, mythology, Japanese woodblock prints, comic books, folk stories, from Meso-American through Middle Eastern and Asian ceramic traditions as well as the people he saw, the places he travelled, and his own dreamworld.

Scott Goss is an interdisciplinary artist who received a BFA from the Cleveland Institute of Art and an MFA from Kent State University. Through projected light onto found objects, this current project explores themes of urban design, architecture and entropy, to create a narrative of how cities rise and fall over time. Using a model train, with a modified light attached to it, this project reveals an endless loop or accession and recession of human civilizations. His work has been exhibited nationally and is represented by galleries in Akron, Cleveland, Columbus, and Pittsburgh. His work and research have additionally been supported through grants by the Ohio Arts Council, Harpo Foundation and Kent State University. Goss is a Lecturer of Foundations at the Cleveland Institute of Art.

Visual artist Orlando Caraballo is the McDonough Emerging Artist this fall. His exhibition in the Judith Rae Solomon Gallery, titled Capicú, explores the effects love, death, grief, and time have had on his place in his family’s legacy. It reflects the complexities of his personal, familial, and cultural systems, peeling back the layers of generational progress and highlighting the power of choice, of strategy and intention in the midst of hardship and generational baggage. Capicú, a term from the Puerto Rican game of dominos, is in essence a win-win: the mano (game)-ending product of team-based strategy and careful observation that leaves a single player with the ability to choose how they are going to claim victory. Born and raised in Cleveland’s West Boulevard neighborhood, he earned a BFA from the Cleveland Institute of Art with a major in Drawing and emphasis in Printmaking.

More information is available by calling the McDonough Museum at 330-941-1371.