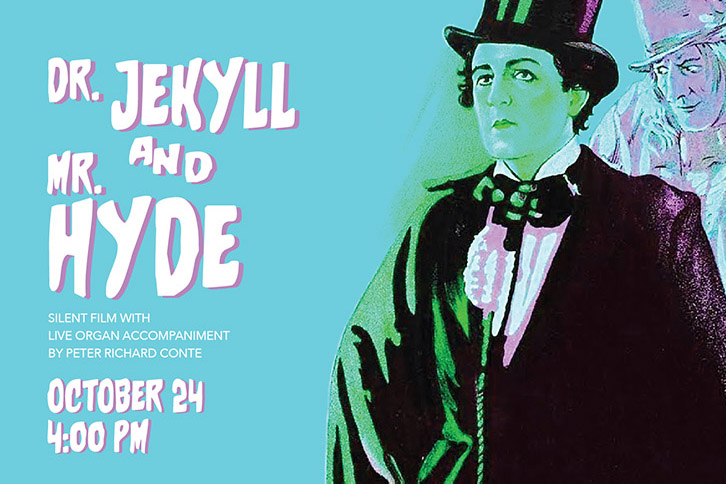 Stambaugh Auditorium will present the silent film Dr. Jekyll and Mr. Hyde with organ accompaniment in a hybrid format on Sunday, October 24 at 4:00pm. The event will feature a live audience in addition to being live-streamed on Stambaugh Auditorium’s Digital Concert Hall App.

The film, adapted from Robert Louis Stevenson’s 1886 novella, Dr. Jekyll and Mr. Hyde was originally released in 1920 as a silent horror film. The story, set in late Victorian London, portrays the tragic consequences of a doctor’s experiments in separating the dual personalities that he thinks define all humans — one of good and one of evil.

Accompaniment to the film will be provided by Organist, Peter Richard Conte on Stambaugh Auditorium’s 1926 E.M. Skinner pipe organ. This is Mr. Conte’s fifth visit to Stambaugh Auditorium to perform on the historic instrument in the renowned Concert Hall. Conte is highly-regarded as a skilled performer and arranger.  Known for his brilliant ear for lush tonal color and innovative programming style, Conte is also very talented at accompanying films. Mr. Conte is the Principal Organist of Longwood Gardens, Kennett Square, PA, and Organist/Choirmaster of St. Clement’s Church, Philadelphia.

Tickets cost $10 and include a bottle of water and a bag of fresh popcorn. The live-streamed portion of the event will be free to view online. For more information and to purchase tickets, visit their website.