Coasters, Drifters, and Platters – In Concert 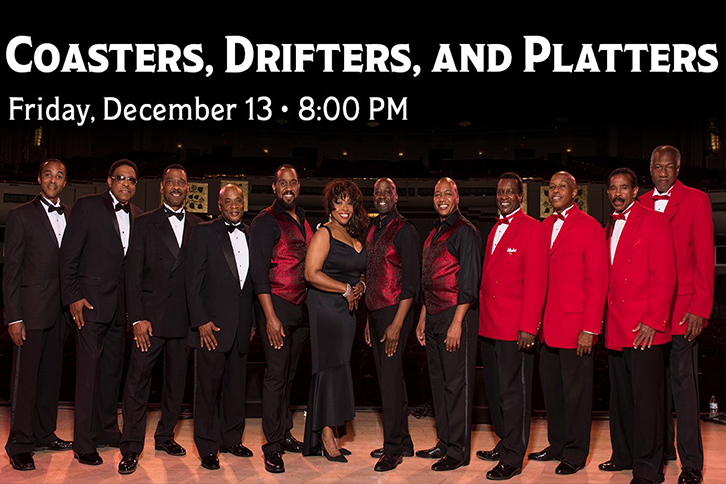 Three Rock and Roll Hall of Fame legends will perform on the same stage! The Drifters, Cornell Gunter’s Coasters, and The Platters in concert together for one night only!

Rock and Roll of Hall of Fame inductees The Cornell Gunter’s Coasters were one of the few artists in rock history to successfully straddle the line between music and comedy. Known for hits such as “Yakety Yak”, ­­”Young Blood” and “Charlie Brown”, their material was witty, their arrangements well-crafted, and the group itself musically proficient. That engaging and infectious combination made them one of the most popular early R&B/rock & roll acts, as well as one of the most consistently entertaining doo wop/vocal groups of all time.

The Platters’ hit single “Only You” launched the group as superstars on the world stage. Soon after, “The Great Pretender” propelled the group to the #1 spot on the charts. Their total record sales exceeded $200 million, making them one of the top 25 selling artists of all time. The Platters churned out hit after hit, bridging the gap between more traditional vocal-group stylings and popular R&B grooves. They were inducted into the Rock and Roll Hall of Fame in 1990 and were the first Rock and Roll group to have a top ten album in America.

The three Hall of Fame groups combine for more than 94 charted records and 34 top hits. Many of these hits will be featured at the December 13th show along with a few holiday favorites. Reserved tickets range from $20-$50. For tickets, call 330-259-0555, go to stambaughauditorium.com, or visit the Florence and Ward Beecher Box Office at Stambaugh Auditorium in person. The box office is open Monday through Friday, 9am-6pm.