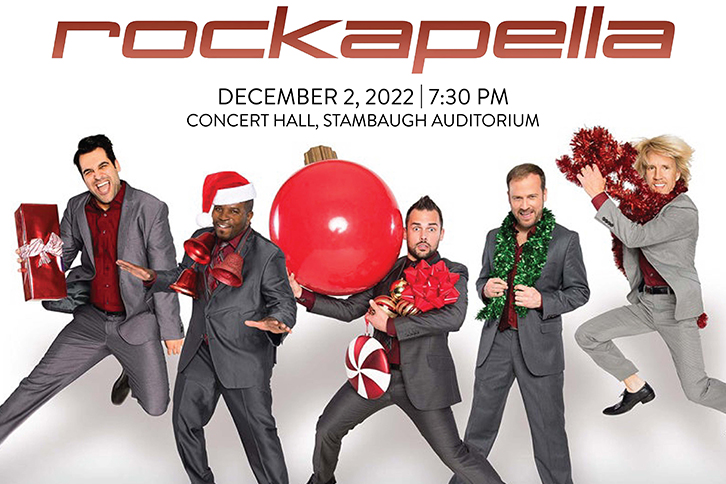 Stambaugh Auditorium will present A Rockapella Christmas on Friday, December 2 at 7:30pm in the Concert Hall. Enjoy the holiday season with an evening of musical performance blend of classic holiday covers and top hits.

Rockapella will bring its exciting, internationally acclaimed, a cappella sound to Youngstown, Ohio with a night of holiday classics. For their new Christmas show, the a capella superstars will perform holiday classics like Silver Bells, Santa Claus Is Coming to Town, and White Christmas along with their original holiday hits The Hope We Hold, Christmas Without You, and more.

Founding Rockapella vocalists, Sean Altman, Elliott Kerman, Steve Keyes, and David Stix originally formed the vocal group in New York City in 1986, and have since released 19 albums in the United States and Japan. The a cappella group received national television fame on PBS’s Where In The World Is Carmen Sandiego? Since then, they have toured the globe and bring funky, powerful pop, rock and R&B music to generations of vocal music fans. The current Rockapella vocalist line-up consists of Scott Leonard, high tenor, Jeff Thacher, vocal percussionist, Calvin Jones, tenor, Bryant Vance, bass, and Jose Rodriguez, tenor. Some of their single a cappella hits are Rock Around the Clock/ Tell Me Something Good, Candy Man, Workin My Way to You, and Sir GotALot.

Ticket prices range from $19-$49 plus a $6 fee per ticket. Tickets will be available Monday through Friday, 10:00am-5:00pm by calling 330-744-0264 or in person at the DeYor Performing Arts Center box office. Tickets are also available 24 hours a day online at stambaughauditorium.com.